With the help of the Guardian, the climate debate has descended into pure farce.

The Graun has just published a letter entitled, ‘Climate change is real. We must not offer credibility to those who deny it‘, whereby a motley crew of journalists, politicians, activists and academics have announce their refusal to debate anthopogenic global warming sceptics: ‘If “balance” means giving voice to those who deny the reality of human-triggered climate change, we will not take part in the debate’.

The reason for this step, we are told, is that on the one hand there is an overwhelming scientific consensus and on the other, that there is a lobby, heavily funded by vested interests, that exists simply to sow doubt to serve those interests. Scepticism represents  ‘fringe views’ which should be ignored. Giving AGW sceptics a platform is apparently akin to showcasing flatearthers, never mind the fact that the official position of the Flat Earth Society is that it supports the climate alarmist narrative. (Of course it was sceptics who first argued that the world wasn’t flat.)

The purpose of the letter is to justify the already well-established practice of refusing to engage in debate on global warming, by marginalising and belittling opponents, and to deplatform them. Because of the shortage of real scientists prepared to put their names to the letter, we have the unedifying spectacle of the likes of Clive Lewis and Peter Tatchell declaring that they are above debating atmospheric physics with scientists of the calibre of  Eric Karlstrom or Nobel Laureate Ivar Giaever.

This exercise in dishonest narcissism demeans all who have signed or lent their support to it.

Why this Letter is a Farce and an Embarrassment

Climate alarmism is heavily funded by big money linked to the Club of Rome, such as the Bill Gates Foundation and the Rockefeller Foundation.  Academic research is funded by these ‘charities’ to produce only results that serve the globalist narrative. Academics who speak out against the narrative do so at the expense of their careers. The claim that it is the sceptical position that is heavily funded is nonsense.

Counter-arguments from AGW sceptics have never been discredited. Michael Mann, for example, who is in litigation with number of people who have openly called his hockystick graph a fraud, such as Tim Ball and Mark Steyn, is still, to my knowledge, refusing to produce the data supposed to justify it.

The claim of ‘overwhelming scientific consensus’ is long debunked; the much vaunted 97% seems to be based on a figure of 76 people.  In any case, given the huge numbers of scientists who have declared climate alarmism to be a hoax (see, for example, the American petition signed by 31,000 scientists, or this list of 1000 scientists) it is hard to see where this 97% could come from.

The vast majority of the signees to the letter would have no show of debating science with a top climate scientist.  Of the 15 or so professors, maybe six are in relevant scientific fields, while the rest are in unrelated fields such as economics, law or psychotherapy. The same applies to others with impressive sounding qualifications – Dr Teresa Belton, for examples, wrote her thesis on the effects of television and video on children. In the case of 90% of the signees – academics, journalist, politicians, activists – the very idea that they could sensibly debate with serious climate scientists is ludicrous.

Signees may still be happy to debate global warming, just not with experts in the field. After I replied to one of the many twitter postings of this letter, Mark Maslin, Professor of Climatology, turned up in my mentions. It was interesting how quickly the debate was reduced to the personal – while I myself was not the politest, I did at least stick to the point. 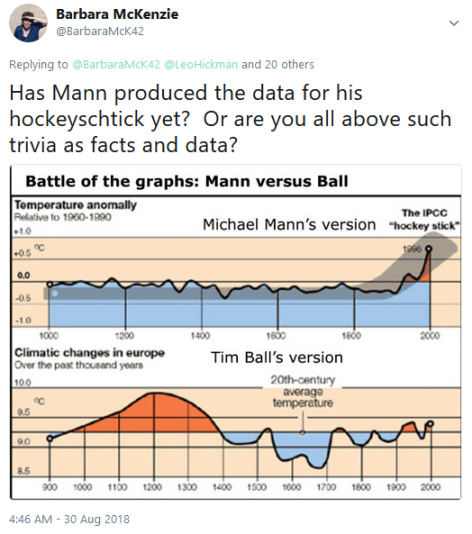 (Nb: Maslin had also changed the timeframe, from 1000 years to 10,000.  My link is to ‘The Marcott Reconstruction Debunked’) 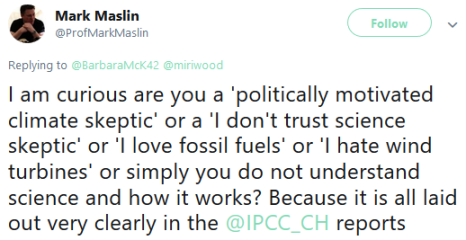 Maslin used classic troll technique: dubious assertion, switch when discredited, ad hominem, personalisation of debate. But more importantly, he appears quite happy to debate with an AGW sceptic when she is a completely unknown to him arts graduate – just not a senior scientist.

After publishing countless alarmist predictions that have not delivered, the Guardian has finally destroyed its last shred of credibility in the matter of ‘anthropogenic global warming’.

However, while the letter invites ridicule and hilarity, it is a deeply worrying thought that climate alarmists can write any old rubbish, and know that the mainstream media, and most of the so-called alternative media, are going to make no attempt to expose them.

Climate activists have long history of ducking debates with skeptics

Climate Alarmism is a Scam and a Hoax