The purpose of this page is to present informally updates relating to the Civil March on Aleppo, main article here, including further information relating to background, and new developments.

Happy New Year to the people of ‘Aleppo’.  In English, German, Polish, but not Arabic. Another polished production.

Disagreements amongst supporters over whether ‘the flag’ should be flown and whether opposition to the Syrian government should be more explicit.  Thank you  @sunami495.  https://linksunten.indymedia.org/en/node/200144

Pics above and below from @Navsteva 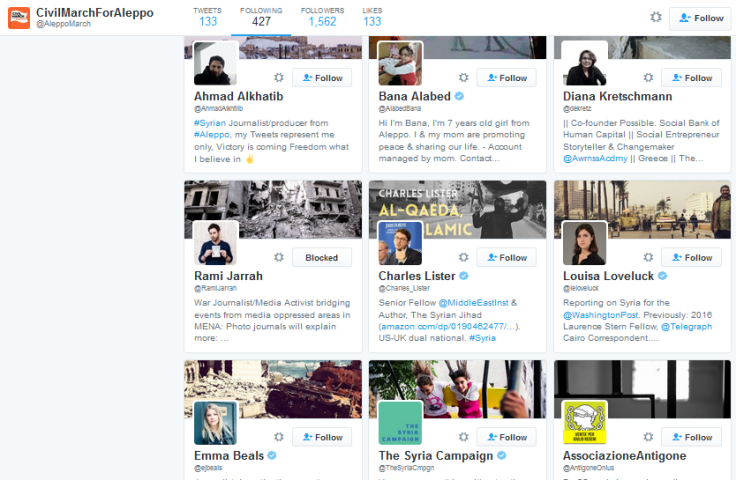 There are striking similarities with the Bana account.  It looks as though the the Civil March follows every single journalist, ‘activist’, official or organisation that asks for a no-fly zone in Syria or campaigns relentlessly on behalf of terrorist groups in Syria and against the Syrian government, including the following:

Other celebrities, such as Ben Affleck, Emma Watson and Mia Farrow.

Other representatives of the corporate media, none noticeably sympathetic to the Syrian government, such as Orla Guerin, who flew to Ankara to interview Bana of Aleppo, Lyse Doucet, Jeremy Bowen, James Longman (sometimes referred to as Jihadi Jim), all of the BBC, Anne Barnard of the New York Times, Josie Ensor of the Telegraph, Jim Clancy.

The International Criminal Court @IntlCrimCourt. According to the manifesto:

Followers: so far the March has not matched @AlabedBana in terms of huge purchases of followers, having only 1,562 followers, but already a large number look suspect.  It will be interesting to see it the numbers change dramatically.

One thought on “FCO and Civil March Addenda”